The most tragic losses are concentrated in northern NSW, where 970,000 hectares have been burned, three people have died, and at least 150 homes have been destroyed.

A catastrophic fire warning for Tuesday 12th November was issued for the Greater Sydney, Greater Hunter, Shoalhaven and Illawarra areas. It is the first time Sydney has received a catastrophic rating since the rating system was developed in 2009.

No relief is in sight from this extremely hot, dry and windy weather, and the extraordinary magnitude of these fires is likely to increase in the coming week. Alarmingly, as Australians increasingly seek a sea-change or tree-change, more people are living in the path of these destructive fires.

Large fires have happened before in northern NSW and southern Queensland during spring and early summer (for example in 1994, 1997, 2000, 2002, and 2018 in northern NSW). But this latest extraordinary situation raises many questions.

It is as if many of the major fires in the past are now being rerun concurrently. What is unprecedented is the size and number of fires rather than the seasonal timing.

The potential for large, intense fires is determined by four fundamental ingredients: a continuous expanse of fuel; extensive and continuous dryness of that fuel; weather conditions conducive to the rapid spread of fire; and ignitions, either human or lightning. These act as a set of switches, in series: all must be “on” for major fires to occur.

Live fuel moisture content in late October 2019. The ‘dry’ and ‘transitional’ moisture categories correspond to conditions associated with over 95% of historical area burned by bushfire.

Estimated from MODIS satellite imagery for the Sydney basin Bioregion.

The NSW north coast and tablelands, along with much of the southern coastal regions of Queensland are famous for their diverse range of eucalypt forest, heathlands and rainforests, which flourish in the warm temperate to subtropical climate.

These forests and shrublands can rapidly accumulate bushfire fuels such as leaf litter, twigs and grasses. The unprecedented drought across much of Australia has created exceptional dryness, including high-altitude areas and places like gullies, water courses, swamps and steep south-facing slopes that are normally too wet to burn.

These typically wet parts of the landscape have literally evaporated, allowing fire to spread unimpeded. The drought has been particularly acute in northern NSW where record low rainfall has led to widespread defoliation and tree death. It is no coincidence current fires correspond directly with hotspots of record low rainfall and above-average temperatures. 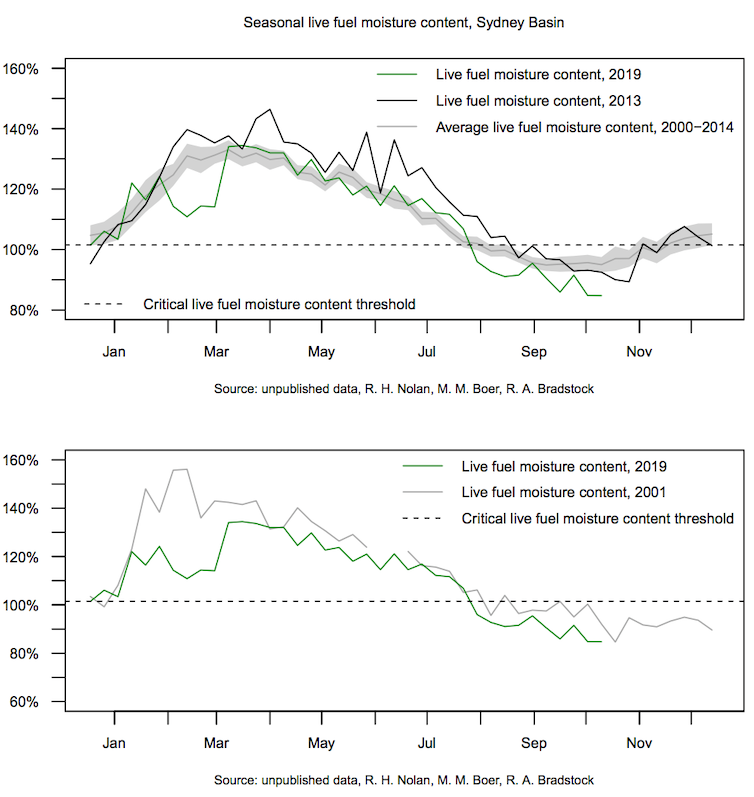 Annual trends in live fuel moisture. The horizontal line represents the threshold for the critical ‘dry’ fuel category, which corresponds to the historical occurrence of most major wildfires in the Bioregion. Estimated from MODIS imagery for the Sydney basin Bioregion

Thus, the North Coast and northern ranges of NSW as well as much of southern and central Queensland have been primed for major fires. A continuous swathe of critically dry fuels across these diverse landscapes existed well before last week, as shown by damaging fires in September and October.

High temperatures and wind speeds, low humidity, and a wave of new ignitions on top of pre-existing fires has created an unprecedented situation of multiple large, intense fires stretching from the coast to the tablelands and parts of the interior.

Many parts of the NSW north coast, southern Queensland and adjacent hinterlands have seen population growth around major towns and cities, as people look for pleasant coastal and rural homes away from the capital cities.

The extraordinary number and ferocity of these fires, plus the increased exposure of people and property, have contributed to recent tragic results.

Communities flanked by forests along the coast and ranges are highly vulnerable because of the way fires spread under the influence of strong westerly winds. Coastal communities wedged between highly flammable forests and heathlands and the sea, are particularly at risk.

These unprecedented fires are an indication that a much-feared future under climate change may have arrived earlier than predicted. The week ahead will present high-stakes new challenges.

The most heavily populated region of the nation is now at critically dry levels of fuel moisture, below those at the time of the disastrous Christmas fires of 2001 and 2013. Climate change has been predicted to strongly increase the chance of large fires across this region. The conditions for Tuesday are a real and more extreme manifestation of these longstanding predictions.

Whatever the successes and failures in this crisis, it is likely that we will have to rethink the way we plan and prepare for wildfires in a hotter, drier and more flammable world.

This article is republished from The Conversation under a Creative Commons license.