The government has given modest comfort to the coal lobby within its ranks by including a NSW upgrade project in its short list for underwriting, and promising to study the feasibility of a coal-fired power station in Queensland.

The study would evaluate projects in north and central Queensland. These “include but are not limited to a new HELE coal project in Collinsville, upgrades of existing generators as well as gas and hydro projects”.

The feasibility study effectively kicks the issue down the road, while giving the Queensland Nationals something to trumpet, and reducing the pressure from them on Prime Minister Scott Morrison.

Resources Minister Matt Canavan, who is from north Queensland, tweeted: “Power prices are too high in North Queensland. That’s why we are backing new power projects, including coal, that will increase supply and bring down prices”.

Queensland Nationals George Christensen said: “The Morrison Liberal National government has approved funding to take the plan for a clean coal-fired power station in Collinsville towards the ‘shovel ready’ stage.”

Twelve projects have been ticked under the Underwriting New Generation Investment program, although there will be no contracts before the election. Morrison said the projects would be looked at in greater detail before being bedded down for underwriting.

He said the selection – from 66 applications – had been “fuel agnostic”. Five involve gas and six are for pumped hyro – including the Tasmanian “Battery of the Nation” project that was previously announced, to send renewable energy to Victoria.

The coal project is a Delta power station upgrade at Lake Macquarie. Morrison described it as “very small”.

The projects deliver a balance which includes renewable, affordable and reliable power for families and businesses and ensure we meet our 2030 targets”, Morrison, Energy Minister Angus Taylor and Canavan said in a statement.

They involve a combined capacity of 3,818 MW of new generation.

Importantly, the emissions intensity of individual projects was considered when finalising the shortlist,” the statement said.

This is around one third the emissions intensity of the National Electricity Market and reflects the significant new pumped hydro and low emissions gas projects in the shortlist”.

The shortlist of “firm-power” projects the government proposes to underwrite 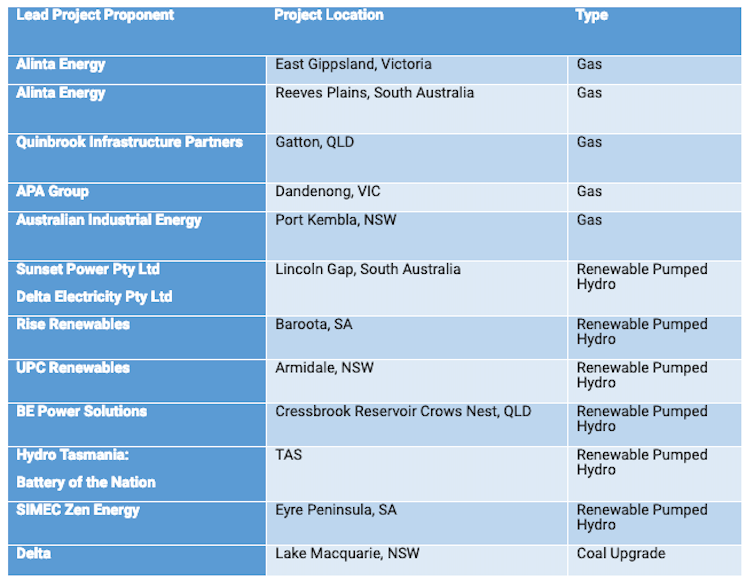 As an objective of the underwriting, “the government will be targeting a 25 to 30% reduction in wholesale prices in each NEM region by 2021”.

The government will provide $10 million over two years as it considers the issues of supply and affordability for high energy-intensive and trade-exposed customers in north and central Queensland.

This will fund a business case to look at customer energy requirements and future generation opportunities to meet them.

Morrison told his news conference: “We have a very specific problem in northern and central Queensland”.

This was to meet the industrial needs of these regions in terms of power. That related especially to the aluminium smelter and the other heavy industries in and around Gladstone. “They need reliable power,” Morrison said.

While the feasibility study would look at a range of projects including the Collinsville one, “there is no commitment to underwrite or support any of those projects. We want to do the proper analysis to work out which project or which group of projects actually delivers on the need.”

He said thousands of jobs, particularly in Gladstone, but more generally in central and northern Queensland, required a reliable power supply.

What my government wants to do, is to ensure that they get that power supply. They get it at the lowest cost and they get it in the best form.”

He said the Collinsville proposal would have an emissions intensity lower than the current average for the entire east coast grid.

So these are projects which, at the end of the day, will continue to help us meet all of our emissions reduction targets. None of those are put at risk by this, in fact they’re enhanced.”

The key point is this: what is the most effective, most sustainable and most affordable and reliable way to save the jobs and keep the jobs of people working in north and central Queensland?”

Tony Wood, director of the energy program at the Grattan Institute, said: “What is interesting after all the hype around new ‘base-load power’ is that the projects except one are all gas or renewables-plus-storage – i.e., firm power.

The exception is a modest upgrade to the Delta Energy coal-fired power station in NSW that presumably will increase its efficiency and therefore reduce the emissions intensity of its power”.

Wood said that at one level, these were “logically sensible projects that could possibly contribute to a low-emissions, reliable energy future. They are the sort of projects that a clear policy framework would deliver without any need for government underwriting”.

But “the policy question remains as to why the government prefers to risk taxpayer dollars on such projects. A better answer is to implement a credible, predictable energy and climate policy regime.

If the projects then make commercial sense, the private sector will fully fund them, and if they do not, then no one should”.

This article is republished from The Conversation under a Creative Commons license.